Enjoy a coffee on the terrace or jump on a train to the beach: the French regain their freedom on Tuesday, even if caution remains in the face of a virus which has killed nearly 30,000 people and caused the economy to almost stop.

Thanks to the continued slowdown of the epidemic since the start of deconfinement on May 11, the government has decided to move into phase 2, synonymous with a virtual return to normal.

This is the end of the ban on traveling more than 100 km from home, a measure eagerly awaited by residents of large cities eager for fresh air or families separated by distance for more than two months.

“Maybe next weekend, I'll go see my grandchildren, who are in Nantes,” said Linda Espallargas in Paris. “But I will take my car to be well insulated because I am still afraid of the virus, I am over 65 years old so I am wary”.

Disinfection of the equipment of the “Body Staff Gym” gym, on June 1, 2020 in Artigues-près-Bordeaux (AFP – MEHDI FEDOUACH)

After the reopening of parks and gardens everywhere on Saturday, the beaches, museums, monuments, zoos and even theaters will be able to reopen on Tuesday, respecting certain rules of distancing or wearing a mask. For cinemas, we will have to wait for phase 3, on June 22.

Left aside during the first phase of deconfinement on May 11, the cafes, bars and restaurants affected by more than two months of closure have been actively preparing for several days to finally welcome the public.

“It is the optimism that reigns today,” said Hervé Becam, vice-president of the Union of Hotel Trades and Industries (Umih).

Optimism because many customers are impatient. “I have already planned to go and have a few drinks on the terrace to take advantage of this form of newfound freedom and try to make local shops work a little,” says Eloi David, in Paris. 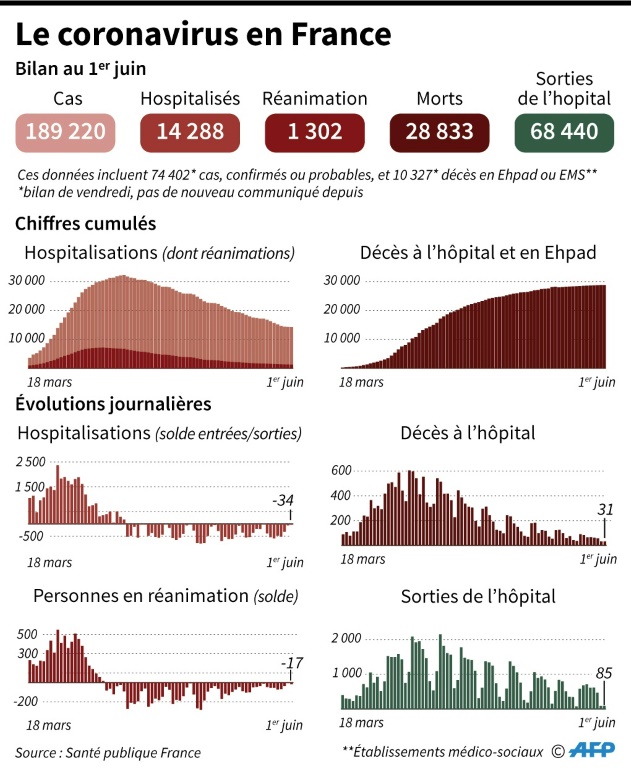 But some establishments will not reopen immediately: too complicated or not profitable, note some.

In orange areas (Ile-de-France, Guyana, Mayotte) still on the alert against the coronavirus, only the terraces can accommodate customers. And in the green zone, inside, no more than ten customers per table and a minimum of one meter between each group.

In terms of national education, all the colleges and lycées in France will gradually open. In the green zone, all the pupils are concerned, but in the orange zone, the colleges will welcome only those of 6th and 5th grade.

“Our objective is that all middle school students, even in the orange zone, have once again had physical contact with their college, for individual interviews, before going on vacation,” assured Minister Jean-Michel Blanquer at the end of the week. last. 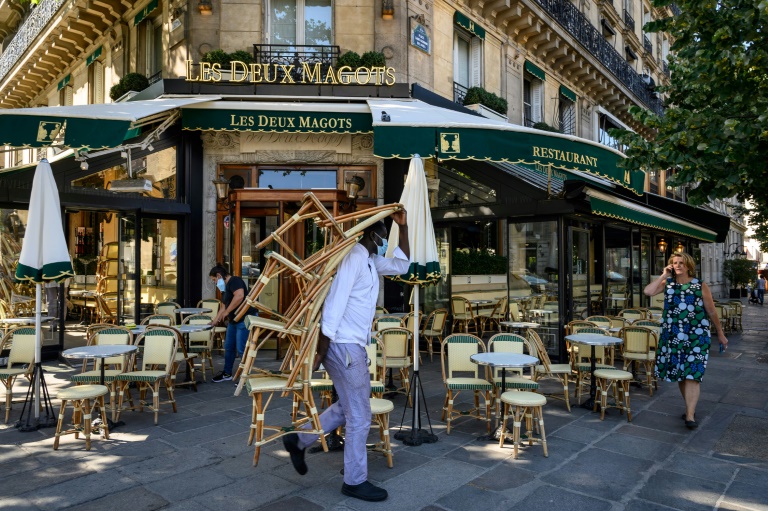 Installation of tables and chairs on the terrace of the café “Les deux Magots” in Paris on June 1, 2020 (AFP – BERTRAND GUAY)

This displayed voluntarism, however, collides with the voluminous health protocol. At all levels of education, having more students while respecting this protocol means that they will be there less often.

The reopening of the high schools, whose announcement was eagerly awaited, will be “gradual” in the green zones, with a ramp-up “by level”, promised the Minister of National Education. In Ile-de-France, students will be welcomed “in small groups” or for “individual interviews” which will allow, as needed, to take stock of their education or their situation in Parcoursup.

The epidemic has killed 28,883 people in France, according to the latest assessment published Monday evening (+31 compared to the previous day, but the Ehpad count is missing). The number of patients in intensive care (1,302) continues to decrease (-17).

But the virus is still in circulation so the health authorities are on the lookout for the slightest sign of a resumption of the epidemic and to nip each new outbreak in the bud.

To help control the spread of the virus, the StopCovid tracking application should be available Tuesday from noon, as a voluntary download on mobile phones. 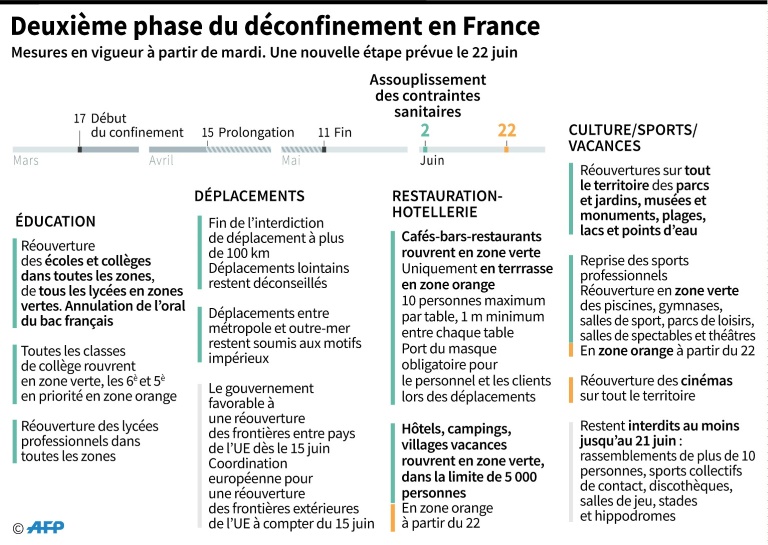 “We need as many people as possible,” said Secretary of State for Digital Cédric O, adding that residents of cities are targeted first, where the virus circulates the most.

In the event of a new wave, the government has already warned that restructuring measures could be taken, in particular traffic restrictions imposed by the prefects at local level.

But a new large-scale containment would hit an economy that is barely starting again, with an 8% recession mentioned by the government for 2020.

“The country will have to fight against the impact of a historic recession,” warned Prime Minister Edouard Philippe.

Smith's “one step at a time” strategy for Air France

New York, at the heart of the coronavirus epidemic that is hitting the United States hard

Egypt has registered a first case of coronavirus, the first on the African continent

Coronavirus: these parliamentary doctors who return to service

Smith's “one step at a time” strategy for Air France

New York, at the heart of the coronavirus epidemic that is hitting the United States hard

Egypt has registered a first case of coronavirus, the first on the African continent

Coronavirus: these parliamentary doctors who return to service

Confinement: businesses were able to survive thanks to the internet

New coronavirus has not become less pathogenic, warns WHO