“My dream is to remove the waiting rooms.” At Amager Hospital, a yellow brick building nestled in a residential area south of Copenhagen, Dr. Jens Henning Rasmussen, head of the emergency department, walks around the two floors he manages. “We have 50,000 patients a year, and in 90% of cases it is minor injuries such as cuts, broken ankles, or eye trauma.” He reigns, in the late afternoon of October, a surprising calm. No stretchers in the corridors and waiting rooms almost empty. On patient arrival tables, the care times displayed do not exceed 15 minutes … Far from the daily emergency in France, where the strike began in March drags on and now affects 269 services. While the 2020 budget of the Sécu must be voted in first reading in the Assembly on Tuesday, the Inter-Hôpitaux and Inter-Urgences are organizing a demonstration in front of the Ministry of Finance, ahead of the major national mobilization of the hospital sector planned for November 14th. Enthused in this crisis, the Minister of Health Agnès Buzyn is very interested in what is happening in Denmark, this Scandinavian country of 5.7 million people often erected as a model on social issues.

Today, the Danes are no longer supposed to go to the hospital on their own initiative. Faced with the same lack of resources and saturated hospital emergencies, how did Denmark manage the crisis? In 2007, the government undertook an unprecedented grooming of the administrative layers of the country. As a result, the hospital card was turned upside down. The state, which devotes 10.4% of its GDP to health (against 11.1% for France), spent nearly 6 billion euros over 10 years in its Hospital Transformation Plan, which has been cut from 40 convenience stores to 21 larger, more specialized facilities. The regions, which are responsible for primary care and emergencies, have had to find ways to compensate for the closure of hospitals. “The idea was not so much to reduce emergency attendance but, more importantly, to treat patients in the right place, at the right time and with adequate treatment,” says Helene Bilsted Probst, director of the Healthcare System Organization. the Danish Health Authority.

Go to the emergency room … by appointment

On the front line, general practitioners have become the backbone of the Danish health system. In four of the five regions of the country, under a contract with the local authorities, they coordinated to ensure continuity of care. And patients must go through a doctor before going to the emergency room. “Outside office hours, generalists take turns to answer a medical assistance number and, if necessary, receive consultations or visit patients, and send only emergency rooms to the hospital. more serious, “explains Jonatan Schloss, President of the Organization of General Practitioners. In Copenhagen, lack of agreement with doctors unions, the region has invested 6.48 million euros to set up another system number 1813.

Since 2014, if their doctor is not available, residents of the capital region (1.8 million) must call 1813 in case of injury or illness. This device coexists with the 112, which remains the number to dial in case of emergency, on a single site in Ballerup, about twenty kilometers west of Copenhagen. “We receive 80,000 calls to 1813 a month, or nearly 3,000 a day,” says Freddy Lippert, CEO of Emergency Medical Services in the region. In 2018, 30% of callers were referred to emergencies. So, 1813 knows in real time the affluence in the 11 hospitals of the region and fixed, according to the urgency, appointments adapted to the patients. “It allows them to wait at home, rather than crashing into emergency waiting rooms,” says Freddy Lippert. On the giant plateau where about fifty carers take turns to answer the calls, this end of autumn morning is rather ordinary. Between midnight and 11 am, 497 files were processed, with a maximum response time of 3 minutes and 30 minutes.

The beginnings of 1813 were not so easy. Since the service is not managed by GPs, it is mainly nurses who answer the calls. Doctors are certainly present in support, but the system has long been considered as a “second zone” device. Cases of meningitis misdiagnosed on the phone, resulting in the death of patients, have recently been added to the fire. “We follow a very strict protocol of telephone consultation, relying on specific questionnaires to help the diagnosis and we take care of 70% of the calls from the beginning to the end,” defends Britta, one of the nurses' leaders. Despite these controversies, the 1813 entered the daily lives of the people of Copenhagen. The milestone of one million calls over the year will be crossed in 2019, for 130,000 calls to 112. And if the first year, visits to emergencies have modestly decreased by 10%, the decline would be of the order of 20 to 25 % over five years.

At the Amager Hospital, the ERs – who on this calm day seem to be waiting for the barge – feel the difference. “Before, people were waiting in the hallway, and they could be aggressive,” recalls Kirsten, a doctor, “some patients are still sent here for nothing, it's the limit of phone calls.” Still, for Frederika, working conditions have improved: “We have more time to deal with real emergencies, which reduces stress.” In the waiting room, the patients also appreciate. “My 11-year-old daughter fell in the schoolyard, and we think her hand is fractured, so we called 1813, who sent us here in no time,” said the rather serene father. Even relief for this thirty-year-old chef who slashed his finger with his kitchen knife. “My boss immediately called the medical help to give me an emergency appointment.” Arrived with a rag as a temporary dressing, he walked to his restaurant located in the neighborhood and was taken care of in a few minutes.

“The doors of emergencies are not closed so far, but the procedure is systematically reminded to those who do not respect the path set up,” says Dr. Jens Henning Rasmussen. Difficult indeed to ignore the rule of the game: Amager clearly displays on the front door the procedure to follow and returns to 1813 or 112. A phone is available to patients outside. Tourists or recalcitrant residents, between 10 and 20% of patients in Amager emergencies still present themselves without having been referred by their doctor or the 1813. Beware of those tempted to cheat: “Except vital emergency, they will have to wait until all people who made an appointment via 1813 before their arrival have passed. “ 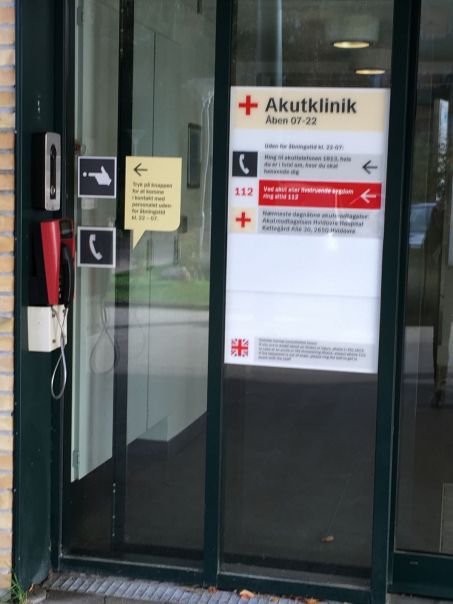 The emergency room entrance of the Amager Hospital in Copenhagen, where a telephone can call directly on 1813. Credit: Isabelle de Foucaud / Challenges

If it arouses international curiosity, from Germany to Israel, through France where Agnès Buzyn wants to set up a unique number of access to care “before the summer of 2020”, the Danish model remains fragile. Over the next thirty years, the population over 75 will almost double in Denmark. At the same time, the number of patients with chronic diseases is exploding. What put this system well prowl under pressure. “It will also take into account the shortage of doctors, which is worsening in our country, says Sidsel Vinge, project leader at the institute Vive Studies, which published a report on 1813. In five to ten years, political decisions will have to be made. Two tracks are on the table: accelerating the integration between city medicine and hospital emergencies, on the one hand, and assigning more tasks to nurses to compensate for the lack of doctors, on the other. twelve years ago is far from over.

This start-up can unclog emergencies

franceinfo junior. “Inspiration comes to feeling, there is never a recipe”

Emergencies: Immersed in a service at the edge of the crisis

the rather calm night of the Pompidou hospital emergencies

This start-up can unclog emergencies

franceinfo junior. “Inspiration comes to feeling, there is never a recipe”

Emergencies: Immersed in a service at the edge of the crisis

the rather calm night of the Pompidou hospital emergencies

a documentary on the extraordinary story of Marthe Hoffnung Cohn, a Jewish girl infiltrated in Nazi territory