Travel to be limited as much as possible, supervised municipal elections, crèches, schools and universities closed from Monday, limited transport … the fight against the new coronavirus is taking a turn after the call launched by Emmanuel Macron to “unite” to brake the epidemic which is starting to slow down France. Faced with “the most serious health crisis in a century”, the President of the Republic posed as a unifier of the Nation to make the French accept drastic measures against the coronavirus. He appealed to everyone's “responsibility” by asking everyone to limit travel to “what is strictly necessary”, and those over the age of 70 and the most vulnerable to stay at home.

⏳ Follow the evolution of the crisis live on Saturday, March 14 …

Taking anti-inflammatory drugs (ibuprofen, cortisone …) “could be a factor in worsening the infection” in patients with coronavirus, warned health minister Olivier Véran on his Twitter account on Saturday.

The Iranian health ministry announced on Saturday 97 new deaths from the new coronavirus, bringing the official toll of the epidemic to 611 dead in Iran, one of the most affected countries in the world.

“1,365 new cases of infected people have been identified in the last 24 hours,” health ministry spokesman Kianouche Jahanpour said during a televised press conference, bringing the number of infections to 12,729. Iran.

. 11.32 am. The Hospitals of Paris “never faced with a phenomenon of such magnitude”

The director general of the Public Assistance-Hospitals of Paris (AP-HP), Martin Hirsch, affirms in an interview published Saturday by Le Monde that his institution has “never been confronted with a phenomenon of such magnitude” that the coronavirus, but that the hospital teams are “ready”.

“I think that never, in professional memory, has it been confronted with a phenomenon of such magnitude with such speed and such high complexity,” he believes.

“Of the approximately 900 screening tests carried out yesterday in our centers, around 20% were positive,” he noted. “There can be an increase in serious cases of 20% to 30% per day”, which “would represent 400 patients simultaneously requiring critical care in Île-de-France within ten to fifteen days”.

To organize and “distribute the means”, the AP-HP was inspired by the year 2018 which experienced a great flu epidemic, by “applying the multiplicative factors specific to Covid-19”. 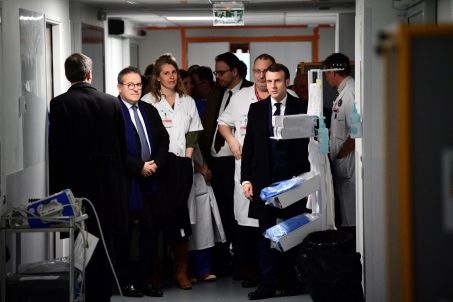 The Abu Dhabi government announced on Saturday that it will close its cultural sites for two weeks, including the Louvre Abu Dhabi, a measure which was confirmed by the antenna of the famous Parisian museum, as part of the fight against the new coronavirus.

“In accordance with preventive measures to ensure the health and safety of visitors, the main tourist attractions of Abu Dhabi (…) will be closed from March 15 to 31,” the government of the capital of the United States said on Twitter. United Arab Emirates.

In response to the current global health situation, the Louvre Abu Dhabi will be closed to the public from Sunday March 15 until the end of March. pic.twitter.com/Noul52x68y

. 11:00. Ports of the metropolis of Nice prohibited to passenger ships

Access to the eight ports of the metropolis of Nice has been closed to ships carrying passengers until further notice in order to “fight” the coronavirus pandemic, according to a decree taken by the metropolis consulted by AFP.

“All the ships carrying passengers are not authorized to dock in the ports of the metropolis. Only the freight remains authorized”, ie the cargo ships of the goods, indicates the decree.

Sunday March 15 will be the first round of municipal elections. The ballot will take place in a special atmosphere in the face of the spread of the coronavirus epidemic, which left 61 dead and 2,876 contaminations in France.

After hesitating Thursday, Emmanuel Macron finally decided to maintain this electoral meeting while enjoining the French to respect the security instructions: maintaining a distance of one meter between voters, respect for “barrier gestures”, signing up with his own pen…

The health crisis reshuffles the cards of an election announced as a scathing defeat for the presidential majority. What will be the level of abstention? Will outgoing mayors be a safe haven for voters? Will anxiety break the dynamics of greens? The thrust of Marine Le Pen's National Rally?

Russia will close to foreigners, from Sunday midnight, its land borders with Norway and Poland, said the Russian Prime Minister in a statement on Saturday.

According to this source, the ban will apply to any foreigner traveling “for professional, private, study or tourist reasons”, with the exception of Belarusian citizens, “members of official delegations” and people with a residence permit in Russia.

Apple will close all its stores outside China until March 27 to try to contain the spread of the new coronavirus, announced its president Tim Cook. The computer and smartphone maker has learned from containment measures in China, where it has just reopened its stores, said Tim Cook in a statement released Friday evening in the United States.

“One of the lessons is that the most effective way to minimize the risk of transmission of the virus is to reduce the (population) density and maximize social distancing,” he said.

As the epidemic progresses outside of China, “we are taking new steps to protect our teams and our customers,” he said.

In our workplaces and communities, we must do all we can to prevent the spread of COVID-19. Apple will be temporarily closing all stores outside of Greater China until March 27 and committing $ 15M to help with worldwide recovery. https://t.co/ArdMA43cFJ

. 9:00 a.m. European travelers quarantined in Taiwan as of March 17

Travelers from the 26 European countries of the Schengen area, Great Britain and Ireland will be placed in quarantine from March 17 for 14 days upon arrival in Taiwan to try to curb the spread of coronavirus, announced the Taiwanese government on Saturday.

This measure will also apply to travelers from Dubai, including passengers in transit, said the government of the island of 23 million inhabitants, recommending that everyone postpone any trip that is not essential.

At this stage, 49 confirmed cases of coronavirus have been identified in Taiwan where a person died of this virus, which appeared in China in December before spreading to the rest of the world, pushing many countries to take drastic measures to try to curb contamination.

The Saudi government announced on Saturday that it would suspend all international flights as early as Sunday for two weeks as part of the fight against the new coronavirus in the country, which recorded 86 cases of contamination.

“The kingdom's government has announced that it will suspend international flights for two weeks (from March 15) as part of its efforts to prevent the spread of the #Coronavirus,” the Saudi foreign ministry said on Twitter.

Uruguay on Friday declared a health emergency and an “unlimited border closure” for an indefinite period after the confirmation of the first four cases of contamination with coronavirus in this country.

Uruguayan President Luis Lacalle Pou announced during a press conference that “mandatory quarantine” had been decided for people arriving from nine “at risk” countries, “the ban on disembarking cruise ships” and “the suspension of all public performances”.

The nine countries considered to be “at risk” are China, South Korea, Japan, Singapore, Iran, Italy, Spain, France and Germany, said the Uruguayan Minister of Health. , Daniel Salinas. It was clarified that this list could be modified according to the evolution of the pandemic.

Colombia will also close its border with Venezuela and restrict the entry of foreigners who have traveled to Europe or Asia in the past 14 days, in the hope of curbing the spread of the coronavirus, President Ivan Duque announced on Friday.

“We are strengthening the protection of our country and we are taking a step forward to combat this pandemic,” said Duque in a statement to the presidential palace in Bogota. 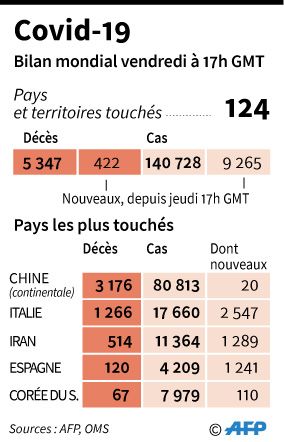 Authorities in Rio de Janeiro announced Friday that schools will be closed for seven days and that theaters, concert halls and stadiums will be closed for two weeks in the face of the growing coronavirus epidemic. According to the mayor of this Brazilian metropolis, Marcelo Crivella, these measures will come into force on Monday.

The governor of the State of Rio, Wilson Witzel, announced for his part in a video “the suspension for fifteen days of events and activities, including those which have already been authorized, implying groupings of people, such as the events sports, shows, fairs, scientific events, political meetings or demonstrations in open or closed places “.

Visits to the visiting rooms of the prisons are also suspended.

The French are preparing to vote on Sunday for the first round of municipal elections in an unprecedented context of a global epidemic. Hour by hour, the health crisis crushes a little more a ballot with challenges yet multiple. It was maintained in extremis, despite the growing concern of the population and the risk of massive abstention, after a campaign that died out in indifference on Friday evening.
With the approach of the vote, Prime Minister Edouard Philippe hammered his “conviction” on the good holding of the elections, including the second round, on March 22, when the epidemic, which left 79 dead in France according to the last balance, will have progressed further in the country.

According to an Elabe poll released on Friday, 58% of French people believe that Emmanuel Macron was right on Thursday to maintain the elections. But they are now also 61% to say “worried” about the spread of the virus, 13 points more than in a previous survey carried out on March 10 and 11.

In polling stations, we prepare to welcome voters in the best possible conditions: door handles, tables, voting booths … everything must be cleaned before the vote and measures are taken to avoid queues and make respect the safety distances. 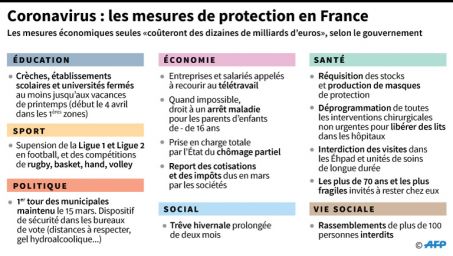 France bans oil drilling in the Scattered Islands, amid a quarrel with Madagascar

February 15, 1992, the day the XV of France hit rock bottom against England

United States: In California, more and more homeless people live in their cars

France bans oil drilling in the Scattered Islands, amid a quarrel with Madagascar

February 15, 1992, the day the XV of France hit rock bottom against England

United States: In California, more and more homeless people live in their cars

in the United States, the House of Representatives votes for free screening and compensation for sick leave

the world of sport at a standstill or behind closed doors